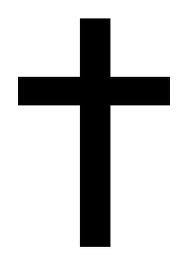 While reading tweets I came across this one:

“If you don’t have Jesus on your Cross in your Church, Do U have the true Presence of Jesus in Communion, in the teachings? Or: Empty Cross?”

So of course I immediately replied:

He is Risen, no longer on the cross. So communion w/0 Jesus on Cross in church is communion w/ the risen Lord. Not meant to offend!

As you can see, I did not want to offend my Catholic Twitter friend. I continued to meditate and mull over what was being said by each of us. The following contains some of my thoughts on the subject.

Of course Jesus died on the cross for me, taking away my sins; dying in my place (and yours). Without this sacrifice, His shed blood, I would not be forgiven and would remain in a state of sin expecting to meet the devil upon my demise. But that is not the case, thank God. Jesus did do that remarkable work on the Cross; but His work did not end there. If it did, I and many others would be worshipping a dead person. How foolish would that be? (A topic for another time)

The fact is that after defeating the devil and releasing the captives by taking the keys of death and Hades, Jesus rose from the dead. The Scripture states that my life is hidden in Christ life (Col 3:3). You see I died with Christ and I also rose with Him. His resurrection gives me the ability to lead a victorious life while I am still here on earth. That’s how I became a new creation (2 Cor 5:17).

As a new person in Him, I have power over the enemy (the devil) and power to conquer the trials and tribulations of life. Furthermore, I get to serve a risen, alive God. See Heb 7:25 and Eph 1:20. While I remember what Christ did for me on the Cross, I commune with my Risen Savior. I can’t leave Him on that Cross. I think so many Christians miss the joy of Christianity because they fail to see the victory of His Ascension on a daily basis. Jesus is making intercession for me (and you) right now to Father God. He is alive. When I commune with Him and pray, I am speaking to someone who is no longer on that Cross but who is alive and wants to have fellowship with me. How glorious is that? You just can’t fail knowing that, can you?

The Apostle Paul tells us that we are MORE than conquerors through Christ (Rom 8:37). So if God be for us, who can be against us (Rom 8:31)?

While it is good to remember Christ did die for us, it is also and always important to remember that He is alive in us, not some far off place in the sweet by and by. The same Spirit who raised Christ from the dead dwells in me (and you if you are His [Rom 8:11]) fellowships or communes with me and empowers me to live a victorious life in Him. It doesn’t get any better than that. So when I commune with Christ as His child, acknowledging that He went to the cross for me but at the same time realizing where He is now, I commune with that cross being empty!

And just as another thought: both Catholic, Protestant and Messianic can learn from one another and come to the unity of the faith thereby presenting a glorious picture of God to an empty, dying world! We have a long way to go, don’t we?